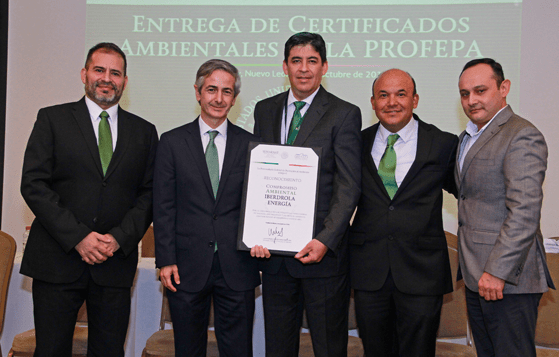 Iberdrola México’s CEO, Enrique Alba, received the award from the head of Profepa, Guillermo Haro, at the ceremony held in the Cintermex Convention center in the city of Monterrey.

This recognition “encourages us to strengthen our commitment to the environment and the fight against climate change and to improve our practices to reduce the carbon footprint, as well as to look for innovative solutions that will help us build a sustainable future”, Enrique Alba said.

“Our objective is to supply efficient, competitive and environmentally friendly energy to contribute to Mexico’s sustainable development”, he added.

Iberdrola México has participated voluntarily for 14 years in Profepa’s National Environmental Audit Program and achieved a compliance level above the one required by law.

At present, seven company’s power plants have been given Clean Industry certification, out of which four hold the Environmental Performance Level 2 (NDA 2) certification. One of these, the Altamira III and IV plant, located in the state of Tamaulipas, has also received the Recognition of Environmental Excellence, the highest environmental recognition awarded by the Mexican Government, in 2017.

Furthermore, this year Iberdrola México became the first private company to win the National Quality Award in the Energy category, which recognizes organizations that are a benchmark for quality and competitiveness.