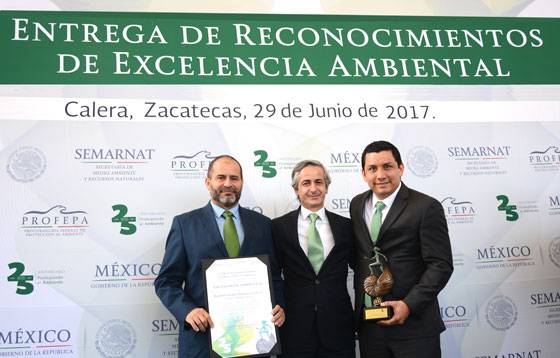 For the first time, Iberdrola Mexico was awarded the Recognition of Environmental Excellence at one of its plants. The award is given by the Secretary of the Environment and Natural Resources (Semarnat) through the Federal Environmental Protection Bureau (Profepa), and it is intended to recognise companies with an exemplary track record and continuous improvement in their commitment to environmental protection.

The Altamira III and IV combined cycle plant, which Iberdrola Mexico operates in Tamulipas state, received this recognition, demonstrating that the company has the commitment to promoting and implementing sustainable environmental practises and to the exercise of social responsibility wherever we work.

“Iberdrola has taken a leadership role in Mexico in the fight against climate change and in support of sustainability and the environment. This recognition demonstrates our social commitment and our responsibility in contributing to environmental conservation and to the country’s development,” Enrique Alba, Iberdrola Mexico General Director, said about the award.

The Altamira III and IV plant is the first one in the Group to receive the Recognition of Environmental Excellence, although all Iberdrola plants in Mexico have already been given the Clean Industry certification, which is also granted by Profepa, as well as the ISO 14001 Environmental Management certification.

In order to receive the Recognition of Environmental Excellence, participating companies must already hold the Environmental Performance Level 2 certification and they must not have received any sort of sanctions from the environmental authorities in the year prior to the certification selection process, among many other requirements.

In addition, participating organisations must provide detailed information about strategies employed in the processes, products and services used in their operations to guarantee environmental protection and conservation, increased ecological efficiency and reduced environmental impact in their activities.

This first Recognition of Environmental Excellence is proof of the leadership and commitment to Mexico’s development that Iberdrola has demonstrated for nearly two decades as the country’s top private electrical power producer, with an installed production capacity of 6,000 megawatts (MW) and another 4,100 MW to come from projects under construction now.