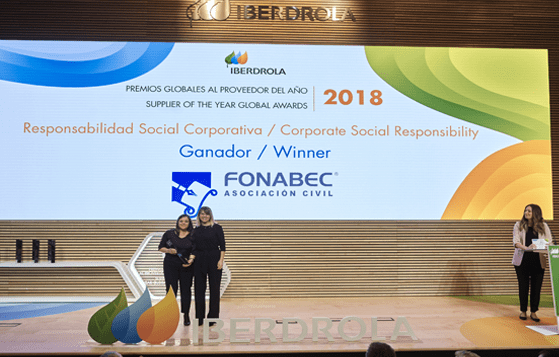 Today, Iberdrola presented the Best Supplier Award for Corporate Social Responsibility to Fonabec A.C., a Mexican organization that has collaborated with Iberdrola México on its corporate volunteering program, at an event where other eleven companies from different nationalities were recognized.

Jessica Montoya, Manager of Fonabec’s programs, received the award from Begoña Barbera, responsible for Social Projects at Iberdrola, at the Global Supplier of the Year Award held at the auditorium of Iberdrola Campus in San Agustín de Guadalix (Madrid).
Iberdrola recognized the Mexican organization for the support provided since the year 2000 to over 13,000 low-income youngsters in Mexico to continue with their middle and higher education.

Fonabec A.C. has been collaborating with Iberdrola México for three years in its corporate volunteering program, INVOLVE, in which the Group’s employees with different nationalities travel to Mexico during their vacations to give courses on computing and new technology to young people in risk of exclusion, giving them tools for better job opportunities.

With partnerships like this, Iberdrola delivers on its commitment to Corporate Social Responsibility and the wellbeing and development of the communities where it has a presence.

Iberdrola, which employs over 400,000 people through its procurement, expects to award contracts worth over 9 billion euros by year’s end.

It is estimated that in Mexico, where Iberdrola has 1,300 suppliers, the amount of purchases of goods and services will total 770 million euros by the end of 2018. In the 2014-2017 period, procurement awards totaled 2.2 billion euros, out of which Mexican companies accounted for 62%.

Ignacio Galán, president of the group, stressed that together with Iberdrola’s suppliers, “we are addressing the important challenges posed by the UN Sustainable Development Goals. Companies – both large and small – are making a key contribution to the realization thereof”.

He also emphasized that “Iberdrola will continue to be an industrial growth engine in the countries where it operates, exerting a significant pull effect on thousands of suppliers around the world.

The Supplier of the Year Award was given to the Brazilian manufacturer, WEG, which has become the Group’s main supplier of transformers, with production centers in three countries that are especially significant for Iberdrola: Brazil, Mexico and the United States, in which Iberdrola contributes to the creation of local jobs – more than 29,000 workers.