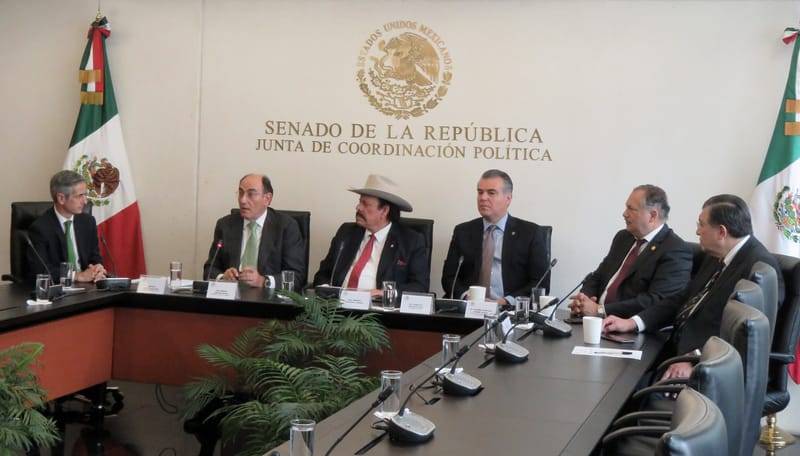 Mexico City, July 3, 2019.- Today, the president of Iberdrola, Ignacio Galán, had a meeting with Armando Guadiana, president of the Senate’s Energy Commission and Ricardo Exsome, representative of the Energy Commission at the Chamber of Deputies, where he reaffirmed the company’s trust in Mexico and its willingness to collaborate with the Government on encouraging economic, social, and energy development in Mexico.

At the meeting held at the Mexican Senate, Galán stressed the importance of the private sector’s collaboration with the public sector in the considerable investment required by the Mexican electricity system in the next few years to reach the economic growth goals set by the Government.

“President López Obrador’s administration may rely on a company like Iberdrola to support his National Development Plan throughout his six-year term. Our commitment is to this country and Mexico can rely on Iberdrola as it has done for the last 20 years”, he said.

Galán explained to the lawmakers the company’s investment plans of up to $5 billion dollars announced during his visit to Mexico last May, which include the construction of new gas-fired power plants and renewable energy facilities, as well as the implementation of more ambitious social projects, aimed at driving community development.

Senator Guadiana welcomed Iberdrola’s commitment and confidence to invest and pointed out that “that balance between ethical companies and the public sector is required for Mexico’s development, so that more people can enjoy the improvements and a healthier life”.

Meanwhile, representative Ricardo Exsome stressed that investment announces like Iberdrola’s are welcomed because they are a “sign of confidence” in the country “This is very good news for Mexico. A country cannot develop without energy”, he added.

Regarding President López Obrador’s initiative to boost the south-southeast region development, Galán announced that the company is developing projects for new power plants in the states of Veracruz, Yucatán, Oaxaca, and Puebla, some of which are already being constructed and will enable development in the area.

In line with the Iberdrola’s Group commitment to the UN 2030 Agenda  for  Sustainable Development Goals (SDG), the company will  start new social programs, including a rural community electrification program in the Huasteca Potosina, reconstruction of schools damaged by 2017 earthquakes in  Oaxaca, and an extensive scholarship plan for youngsters that comprises supports for women in Oaxaca to study engineering and software, digitalization and computing courses.